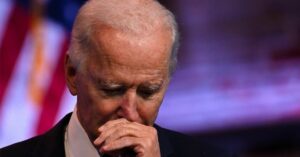 Just prior to the 2020 elections, there were allegations dismissed as lies and fake news that a diary belonging to Ashley Biden, President Joe Biden’s adult daughter, had been discovered and contained all sorts of scandalous sexual claims, including some involving her father. But while the Biden diary had initially been dismissed, it has now seemingly been confirmed by The New York Times in an article detailing how it ended up with conservative guerilla media group Project Veritas and sparked an FBI raid over its alleged theft, according to a bombshell report. Of course, while not proof positive of the veracity of the contents of the diary, the account from The Times confirming its actual existence directly undercuts the prior dismissive narratives and lends credence to its authenticity. How and why Project Veritas was raided over a diary According to The New York Times, Ashley Biden had left the diary and other belongings behind in a house she had rented in Delray Beach, Florida in 2019, where it was subsequently discovered months later by a new tenant, a mother with two children named Aimee Harris, who was reportedly a supporter of former President Donald Trump. She and another individual are alleged to have passed the diary along to Project Veritas just weeks ahead of the 2020 election, but that group’s founder, James O’Keefe, made the decision to not publish prior to the election as it would be construed as a “cheap shot,” according to an internal memo. He did, however, attempt to use it as leverage against the Biden campaign, only to be accused of possessing potentially “stolen” property. The diary and other belongings of Ashley Biden were eventually turned over to the Delray Beach police and presumably returned to her, but now O’Keefe and his organization have been raided and face potential prosecution by President Biden’s Justice Department. “Showers w/ my dad” that were “probably not appropriate” Meanwhile, at the same time that Project Veritas reportedly declined to publish the Biden diary, a copy of it was also leaked to another media outlet known as National File, where journalist Patrick Howley went ahead and published the contents of the diary allegedly belonging to then-candidate Biden’s daughter just days before the election. Those published excerpts revealed Ashley Biden’s deeply troubled past that undoubtedly contributed to her publicized alcohol and drug problems, for which she has been in and out of rehab. In addition to the drugs and alcohol, the diary also reveals that Biden suffered from an addiction to sex, which she attributed to being “hyper-sexualized” as a young child, along with her cousin Caroline. At one point, recalling what led to her sex addiction was also her belief that she had been “molested” at a young age, “somewhat being sexualized with Caroline,” having “sex with friends” at a young age, and “showers w/ my dad,” which she added in parentheses was “probably not appropriate.” The diary is real, and America deserves to know about it National File noted at that time that portions of the diary made it explicitly clear that it belonged to Ashley Biden, a handwriting expert confirmed that it had been written by her, and the outlet even claimed to have an audiotape of Biden admitting that the diary was hers. The Times noted in its report that the diary had been published by National File prior to the election but asserted that “it got little attention” — neglecting to mention the now-debunked dismissals or how the mainstream media simply ignored it or how it has continued to circulate as an unconfirmed rumor, until now, on social media. Now that the existence and authenticity of the Ashley Biden diary has seemingly been confirmed by The Time, perhaps we can move on to discuss some of the serious and rather disturbing accounts and allegations contained therein, particularly as they relate to the current president of the United States.

Copy and paste this URL into your WordPress site to embed

Copy and paste this code into your site to embed